The Poor You Have With You Always 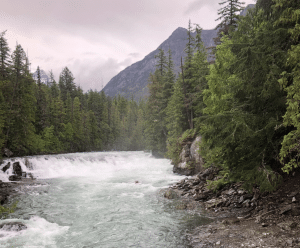 “The poor you have with you always,” said Jesus. But they’re not supposed to be the same poor.

In the 1970s, during college, my husband worked a summer job at a tomato cannery. He tells how depressing it was to look up at the clock and realize only 5 minutes had gone by since the last time he’d looked. What a life-sucking job. But for him it was temporary. After weeks of this monotony, he could quit — move on.

But what about those who can’t move on? What about those who are stuck in jobs nobody wants? We of a certain class talk about finding our vocation, our calling — a profession that fulfills us. Do we then assume that those laboring in menial jobs have no calling? No aspirations for a better life?

You know, if I were a refugee, escaping gang violence in Central America, I would happily work that tomato cannery job. I’d welcome the chance to trade imminent danger for boring security and predictability. YES! Where do I sign up?

But, after a while, maybe I’ll regain my equilibrium. Maybe I’ll start to feel safer, able to let myself dream a little. Maybe I’ll move onto something better, and hand that cannery job over to another fugitive from violence … or college student.

When Jesus said, “The poor you have with you always,” I think this is what He meant. It’s not supposed to be the same people, stuck in endless poverty. He intends for the poor to be helped out of their dismal state, even though more impoverished will always pop up to take their place. Far from resigning ourselves to the hopeless fact of ongoing poverty, Jesus intends for His followers to use what we have to help those who don’t have.

I think this because that’s what Jesus did. He healed the sick and fed the hungry. He used what He had to help relieve suffering of all kinds.

I think this, also, because of the “river imagery” that shows up throughout the Bible — from the four rivers flowing from Eden, to the bright crystal river of Revelation — rivers of life … healing rivers. Rivers inherently bring change. “You can never step in the same river twice,” we’re told.

And yet, many so-called Jesus followers fear change. We prefer the status quo instead.

I’m thinking about our current outrage toward some folks who won’t resume their dead-end, pre-pandemic jobs. Our “Thank You, Essential Worker” sentiments have morphed into “Who do you think you are? Get back to work so we can finally go back to our favorite restaurants, and have shorter lines at the airport.”

But what if the pandemic offered some of these folks a sort of Sabbatical — a unique window of time to reflect on their lives. What if, thanks to government assistance, they could re-assess, explore a new direction, while still feeding their families and keeping a roof over their heads. Sabbatical, of course, is another biblical, God-ordained concept — integral to the proper functioning of God’s magnum opus: humankind.

Do we view the impoverished, the immigrant, the victimized as human? As beloved? As equal to ourselves and those like us? Or do we view them as labor, as a commodity — as unrelatable others?

There was a time when I saw myself as part of the “hard-working, up-by-the-bootstraps, middle-class” — pursuing the American Dream without knowing that’s what I was doing. In the past five or six years, I’ve come to realize how nepotistic that Dream is. Oblivious to the advantages of my white, middle-class upbringing (my parents were both teachers), I gave scarce attention to the poor, and way too easily dismissed them as lazy or undeserving.

But now I can no longer delude myself as to the inequities of our country and the world.

As my eyes adjust to this new awareness of an old reality, I see my complicity in a system that functions more like a cesspool than a river — slotting people into a life sentence of monotony, instead of inviting them into a life-giving, flowing stream … offering promise of change, improvement, healing — moving along, evolving.

If the American Dream is predicated on keeping one group down in order to keep ourselves moving up, then it is not ethical. It is not of God. And it is not the way it is supposed to be.

What’s more important: the American economy or people made in the image of God? What should be our focus? If our economy only works when a lot of people are doomed to a lifetime of lousy, dead-end jobs, shouldn’t that matter to us? Imagine a nation, a world, with pockets of people devoted to helping those within their reach take the next step toward achieving their potential, toward a better life — launching the disenfranchised on a river of change, freedom, exploration.

Of course, the irony is that our stingy politics of greed keeps all of us — rich, poor, and in-between — in the cesspool instead of the thriving, life-giving river. We’re too short-sighted to see that charity to the poor benefits everyone.

At the very least, we can support public policy that brings relief to the needy. We can also educate ourselves on pertinent issues, and engage in civil discourse with unaligned others. We can search out avenues of action at our local level. And we can be a voice for calling out those who identify by the name of Christ, but bear little resemblance to One who exchanged the perks of Deity for incarnation as an oppressed and ethnically marginalized son of an unwed mother.

Until God’s Kingdom fully comes, we’re to replicate this Kingdom on Earth — wherever we have influence. We’re to figure out what people around us need to thrive and invest our resources toward helping them to do so.

“And on the banks, on both sides of the river, there will grow all kinds of trees for food. Their leaves will not wither, nor will their fruit fail, but they will bear fresh fruit every month, because the water for them flows from the sanctuary. Their fruit will be for food, and their leaves for healing.” Ezekiel 47:12